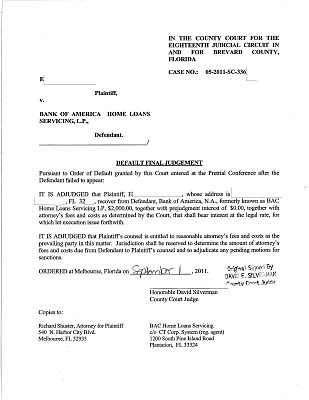 Banks win most of their cases by default, the legal equivalent of a forfeit in sports. For a bank to win a case by default the homeowner must bury their head in the sand and fail to respond to the lawsuit filed by the bank. When Shuster & Saben, LLC sued Bank of America subsidiary BAC Home Loan Servicing, the shoe was on the other foot, when Bank of America failed to show up for a mandatory pretrial hearing. At the hearing the Court entered a default against Bank of America. A few days later after submission of an affidavit as to damages the Court entered a default final judgment against the bank. The law suit filed on behalf of a foreclosure defense client sought damages for violation of RESPA ( Real Estate Settlement Procedures Act ) and FCCPA (Florida Consumer Collection Practices Act ). Bank of America as the losing party in the litigation will also have to pay all of the homeowner’s legal fees, in addition to the amount of the judgment for damages. Since the bank will have to pay our client’s attorney’s fees the entire judgment amount will go to the client.

To review a redacted copy of the default final judgment please click the link below:
Redacted Default Final Judgment

About Shuster & Saben: Shuster & Saben believes the ultimate result of many foreclosure cases can be improved by going on offense and bringing a separate lawsuit for any bank violations of consumer protection laws. Shuster & Saben accepts referrals from other law firms whose foreclosure clients’ rights have been violated where the referring firm does not wish to handle the file alone or would prefer to refer the case to a firm with greater experience suing banks and loan servicers.
Posted by Unknown at 12:26 AM 1 comment:

Lender dismisses case rather than going to trial against firm attorney Thomas Willis.

On Friday, September 16, 2011, Shuster & Saben foreclosure defense attorney Thomas Willis arrived at the Miami-Dade courthouse long before 9:00 A.M. for a foreclosure trial again GMAC, a lender that has since changed its name to Ally Bank. The trial was set before Judge Victoria Sigler. Representing the GMAC was Albertelli Law who took over the case from Florida Default Law Group, P. L. who had previously taken over the file the law firm that filed the case David Stern, P.A. ( David Stern, P.A. was one of the largest foreclosure firms in Florida before in imploded following an investigation into the firm by the Florida Attorney General ).

While Mr. Willis was ready with the firm’s client and the evidence, discovery, and legal research he would need to try the case, when the case was called for trial, Albertelli Law announced that GMAC was not in a position to try the case and dismissed the foreclosure case against the firm’s client. The subject lawsuit against our Cutler Bay, Florida client was filed in 2009. Shuster & Saben began defending the case in early 2010 after David Stern, P.A. set the client for deposition. The lawsuit sought to foreclosure on rental property owned by the firm’s client. While the case was pending the client used a portion of the rental income from the property to pay her legal expenses. The firm successfully stopped the efforts of the bank’s lawyers to win the case by summary judgment. Since the dismissal of the case was without prejudice it is possible that GMAC might refile the foreclosure action in the future. Our firm will now file a motion for attorney’s fees, to force GMAC to reimburse our client’s legal expenses. The firm congratulates our client who had the persistence to fight her case for over two year, and welcomes her to our winners circle of clients who won their cases and have received or will receive money back when the firm assists them in recovering prevailing party attorneys fees from the banks they defeated.

About Shuster & Saben, LLC: Shuster & Saben, LLC is a litigation firm that tries cases against banks and insurance companies. A homeowner who merely wants foreclosure delay, probably does not need an attorney. A homeowner who wants foreclosure defense, should seek out a firm that is winning cases at summary judgment and trial. Our firm’s goal is to prepare each case for summary judgment and trial while negotiating to see if we can obtain a deal that meets our client’s objectives. For more information about our firm and our track record handling foreclosure cases, please e-mail foreclosuredefenselaw@gmail.com or call any of our four office ( Miami, Doral, Fort Lauderdale, and Melboune ). Homeowners in foreclosure may request a free, no-obligation consultation with an attorney.

About Thomas Willis: Thomas Willis is a 1996 graduate of Stetson law school where he was a member of Stetson’s nation championship winning trial team. Mr. Willis has been defending foreclosure for Shuster & Saben, LLC since 2008. Mr. Willis is fluent in Spanish and lived in South America for several years. He has appeared on Univision news casts and talk shows as an expert and panelist on foreclosure law issues.
Posted by Unknown at 3:26 PM No comments: 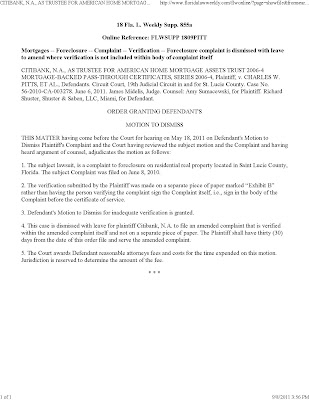 The Florida Law Weekly supplement has published an order granting a motion to dismiss obtained for a Saint Lucie County foreclosure defense client. The Florida Law Weekly Supplement publishes legally significant rulings of Florida’s county and circuit courts. The publication is available to Florida Lawyers on a subscription basis. This was the fourth published foreclosure opinion obtained by the firm and the third published foreclosure opinion for firm attorney Richard Shuster. Mr. Shuster has over twenty published opinions in a wide range of civil litigation matters.

Judge James Midelis, agreed with the firm’s arguments and granted the motion to dismiss the foreclosure case. The Court also ordered Citiabank to pay the homeowner’s attorneys fees. For the hearing on this case firm attorney Richard Shuster traveled from the firm’s Melbourne office to St. Lucie, Florida where the hearing was held. To download a copy of the order in Adobe Acrobat (pdf) format please click the link below. Homeowners who have questions about whether the foreclosure complaint against their home was properly verified may E-mail the firm at foreclosuredefenselaw@gmail.com.

About Shuster & Saben: Shuster & Saben, LLC is a litigation firm of seven attorneys with offices in Miami, Fort Lauderdale, and Melbourne Florida. The firm passionately defends foreclosure cases in those parts of the state that are within two hours of the firm's three offices. The firm also sues banks and loan servicers that violations of the Fair Debt Collection Practices Act, Truth In Lending Act and other consumer protection laws. Our goal is to deliver superior representation at a cost that is affordable, predictable, and an excellent value. Homeowners in foreclosure are welcome call or e-mail to obtain a free, no-obligation consultation with a firm attorney.
Posted by Unknown at 7:18 AM No comments: